On May 7,2022, Windcrest voters will have the opportunity to vote on Proposition A, for the purpose of designing, acquiring, constructing, and equipping a new aquatic center at Jim Seal and Crestway Drive as part of the City's public park system.  Refer to the NOTICE OF ELECTION /AVISO DE ELECCIÓN A  for a list of Vote Centers within Bexar County.  All Windcrest voters may vote at the Takas Park Civic Center, located at 9310 Jim Seal Drive.

What is on the ballot?

The Special Bond Election, Proposition A, would dedicate funding for the purpose of acquiring, constructing, renovating, improving, and equipping an aquatic center as part of the City's public park system.

If Proposition A passes it would allow the City to seek funding in a form of debt obligation that, when issued, provides local government with funds to finance large capital improvements. At the City Council Meeting on February 7, 2022, Ordinance 2022-002(0) was approved calling a bond election, authorizing to issue and sell one or more series of general obligation bonds of the City in the aggregate principal amount of not more than $5 million.

How will Proposition A read on the ballot?

For addtional information on Proposition A, please refer to the May 7, 2022 Voter Information Guide.

Tuesday, April 25, 2022: Last day to receive an application by mail for a ballot to be voted by mail (by close of business).  Applications will only be received by the Bexar County Election Office.

Wednesday, May 4, 2022: Last day to receive an application to cancel mail ballot that has not arrived at the address on the carrier envelope. Contact the Bexar County Election Office for questions. 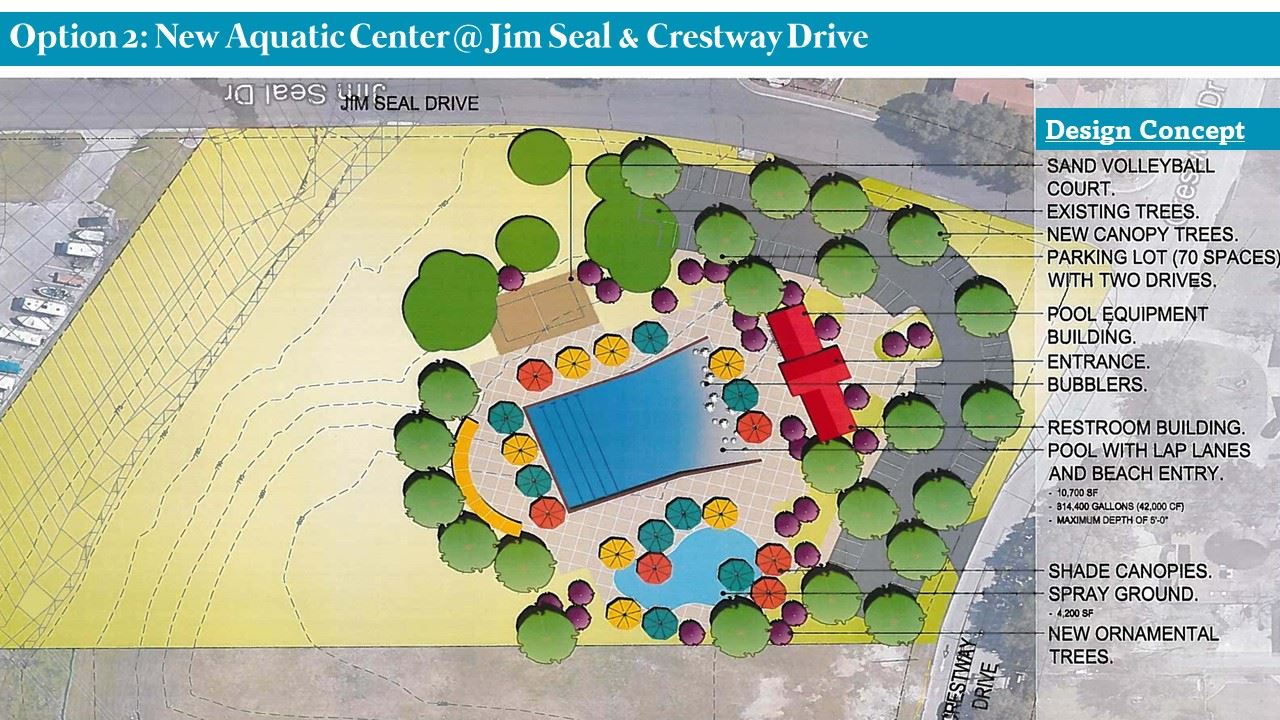 This Recreational Pool option is only a concept at the moment. The design and activities available at the location can be modified

If Proposition A passes, when will the project begin?

The City will likely sell the bonds in early 2023. Once the bonds are sold, we estimate that the design plan could begin within 60 days but only after the appropriate government contracting rules are followed. The project is projected to be completed in Summer of 2023, pending environmental conditions and availability of construction supplies.

What is the estimated cost of Proposition A?

What is the current bond debt obligation for the City?

Will the City hold a community meeting to receive input from citizens on the design plan if 'Proposition A' passes?

Yes, the City will hold one or two community meetings to receive input on the design concept of the aquatic center. They may be scheduled shortly after the election to stay on track with the proposed timeline of opening in Summer 2023.

If Proposition A does not pass, will City Council consider fixing the existing pool?

No. At the January 10, 2022 City Council meeting, City Council determined due to the cost estimate of over $1 million for the pool repairs, with only a one (1) year warranty, it would not be cost-effective. Additionally, the estimated repair cost did not include the parking requirements needed as outlined by City Code. Parking expansion would be an added cost of $400,000.

What will happen to the property where the existing pool is located?

At this time, nothing has been decided on the next steps for the property. However, the land can be sold at an auction, once all of the due diligence is completed or it could be kept by the city for another use.

Will citizens be able to decide what happens to the land where the old pool is located if the new pool is relocated?

The City Council will have the final decision on what happens to the land if the new pool is relocated. Citizens are welcome to contribute input by signing up for Citizens to be Heard at a City Council meeting.

Can the volleyball court in the concept design be removed and replaced with a picnic area?

Yes. The pool design is only a concept and can be altered as long as the alterations fit into the budget that has been set. A community meeting will be scheduled to receive input on the design if Proposition A passes.

Why can the pool stay open almost year-round?

The rectangular design of this pool provides the opportunity for a retractable cover to be added to the pool.

Will this amenity be ADA compliant?